TUKWILA, May 28, 2019—The Museum aims to be the world’s best destination to celebrate the 50th anniversary of the Moon landing with an extravagant three-day, July 19-21 weekend festival orbiting the historic date. Headlining this “Lunar Block Party” is a one-night-only reunion concert of ABC's American Idol season 2 winner Laine Hardy and all of the Top 10 finalists with Host Bobby Bones on July 20.

The weekend Lunar Block Party will offer live music, theater and special events day and night to compliment the Museum’s signature exhibition of Destination Moon: The Apollo 11 Mission, the only place on Earth to see the actual spacecraft flown on the first trip to the surface of the Moon—the command module Columbia—plus many other objects from that epic mission and the Space Race.

Tickets: Adult - $50, Youth (4-17) - $15, Children 4 and under - FREE
Destination Moon access included in ticket price and is limited and first-come, first-serve. Entry time reserved at the event.

The 50th Anniversary Celebration on Saturday, July 20 is a 6-11 p.m. outdoor festival with a concert at 8 p.m. with ABC's American Idol season two winner Laine Hardy with all of the Top 10 finalists, reunited for one night only to celebrate the 50th anniversary of the Moon landing.

The master of ceremonies will be American Idol Host Bobby Bones. Preceding the concert, a tribute and toast will mark the exact moment Neil Armstrong took his first steps on the lunar surface on this day in 1969 at 7:56 p.m. PDT.

Widely considered the most talented group of contestants in the show’s 17-year history, American Idol’s season two Top 10 reunite for to celebrate the 50th anniversary of the Moon landing. The Top 10 finalists are (pictured L-R from top in photo): Alejandro Aranda, Laci Kaye Booth, Walker Burroughs, Wade Cota, Dimitrius Graham, Laine Hardy, Jeremiah Lloyd Harmon, Alyssa Raghu, Uché and Madison VanDenburg. Produced by Fremantle and Industrial Media’s 19 Entertainment, American Idol is set to return in 2020 for a third season on ABC. Head to americanidol.com/auditions for information on local city and online auditions for your chance to become America’s next Idol. 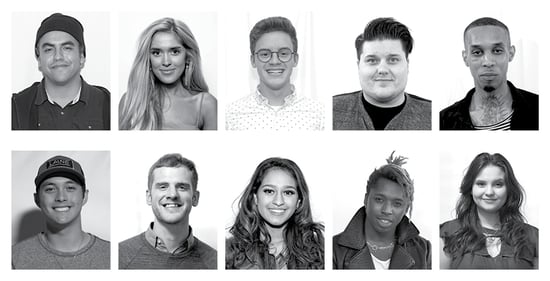 The VIP experience begins in the Museum’s View Lounge with a private bar and appetizers before an exclusive, live performance by ABC’s American Idol season 2 winner Laine Hardy. Guests will also be invited to mingle with the other Top 10 American Idol finalists while listening to a mini-concert from renowned Seattle pianist Walt Wagner. After a champagne toast, VIPs are welcome to front-row seating for the 50th anniversary concert, or they can enjoy the show from a private balcony outside the Lounge. Destination Moon access included in ticket price and is limited and first-come, first-served. Entry time reserved at the event.

Splashdown Sunday on July 21 is a 21+ 9 a.m. to noon gourmet luncheon with tomorrow’s space explorers. The event features scientists, engineers, and astronauts from NASA and former astronaut Dr. Nicholas Patrick from Blue Origin. There will be an expert at every table. The brunch also features a moderated panel discussion and Next Gen spacecraft presentations focusing on Orion, Space Launch System, Exploration Ground Systems, and spacecraft human factors.

Learn more about these technologies, see this video from NASA.

All tickets to the SplashDown Sunday includes admission to Destination Moon: The Apollo 11 Mission (with tours 9-10 a.m.), and to Stephen Edwards’ Moon Landing, the Musical. Tickets: $135.

Destination Moon: The Apollo 11 Mission Exhibition
The command module flown on humankind’s first journey to the Moon is the centerpiece of the Museum’s special exhibition, open now through Sept 2. Organized by the Smithsonian Institution, Destination Moon: The Apollo 11 Mission, presented in partnership with the Smithsonian Institution, celebrates that historic flight.

The challenge of putting the first steps on the Moon moved a nation during the 1960s, Apollo’s legacy now inspires today’s spaceflight adventurers. The exhibition takes one back with original Apollo 11-flown objects, interactives and unique artifacts from the Space Race. Only here will you experience them during Apollo 11’s 50th anniversary, and feel reason to celebrate the beginning of today’s New Space Age.

In its only West Coast appearance Destination Moon includes more that 20 one-of-a-kind artifacts from the Smithsonian, many flown on the historic mission, plus dozens of NASA and Russian spaceflight additions from the Museum’s renowned collection.

Seattle’s Summer of Space
Moon Rocks chocolate bars anyone? In conjunction with the Museum’s Destination Moon: The Apollo 11 Mission exhibition, from April 13-Sept. 2, dozens of local businesses, restaurants, attractions and organizations will offer stellar space-themed products, special promotions and events celebrating the 50th anniversary of the Moon landing under the moniker Seattle’s Summer of Space.

The Northwest’s top producers of food and drinks will feature new local brews and spirits, sodas, ice creams, chocolates and more, while attractions, hotels and restaurants will offer discounts and special Seattle’s Summer of Space events. All of the partner specials and calendar of events can be found on the dedicated website: www.seattlessummerofspace.org

For more information, and to find out how to participate in Seattle’s Summer of Space, contact The Museum of Flight’s Ashley Messmer at amessmer@museumofflight.org